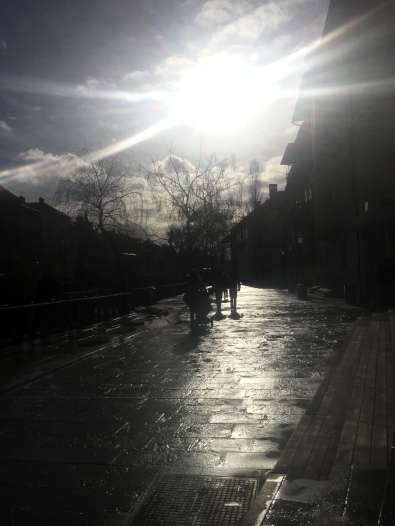 I was mostly alone for two months before I had any friends or family in Ljubljana, Slovenia, where I’m living for the year on a Fulbright Grant. At the pre-departure orientation in DC this summer, we were told about the three phases of culture shock when adjusting to living in a new country.

Phase one is called “The Honeymoon.” I felt that for about a second. You may have seen my Facebook photo of it. It’s me in the fall with a glass of Riesling in my hand and a big smile on my face. I had gone by myself to the citywide Wine Festival and was happy to be walking the cobbled streets in the sun, but had to ask a couple of strangers to take a picture of me. We laughed together for a few minutes and after awkwardly lingering too long, I passed quickly into phase two, “The Rejection,” a time when the desire to withdraw from the new culture arises.

So alone, I worked. Alone, I rode my bike. Alone, I walked. Some days I’d go to the open market and buy handfuls of fermented turnips to eat for dinner. I didn’t learn much about Slovenia, which is something the U.S. Bureau for Cultural Affairs recommends doing to offset culture shock.

My new American friends, who arrived a few weeks ago and are here now for six months, already know so much more than I do about Slovenia. They know how to ride the bus all over Ljubljana. I’ve never even been on the bus. They know about the hot chocolate with a pudding consistency and how to order an American version if that’s your preference. They know about eroding statues in the square and how to get organic yogurt out of a machine on the street. All I seem to know about is how much a falafel wrap costs at the Middle Eastern restaurant near my apartment–three euros. I bought one almost every day during those first two months and ate it alone in my apartment. I’m sure my new friends, a family of five, have had many things to struggle with, but for me, living alone, something I had never done in my forty-plus years, was like learning a completely new way of being.

I began to feel removed from the world, isolated. When entering phase two of culture shock, the U.S. Bureau for Cultural Affairs says, “don’t isolate” (too late) and “often people have minor health issues,” so I found a (+) symbol in red on my Ljubljana map when I didn’t feel well. I walked the half-mile to the socialized health center. Beyond the glass entryway was a large corridor-type room with long rows of patients and several doors, each covered with posters and signs in the Slovene language. There was no reception or front desk. I asked a patient what the procedure was to see a doctor. She shook her head to let me know she didn’t speak English. I asked another patient. “Italiano?” he asked me. I shook my head, no I don’t speak Italian. I began to sweat with a low-grade fever in my down coat, my wool hat. I looked at the rows of patients. So many of them were staring at me, but I didn’t feel seen. I felt as though they were looking at a person who didn’t exist, an alien, a ghost, a stranger. It was as though I was suspended in a place where there could be no opening between myself and anyone else.

I passed through crowds of people speaking a language so foreign to me I had started not to notice them speaking at all. In this way, there was a kind of silence. I was alone with my own thoughts, in relationship solely to myself. The only thing that distracted me was when I heard English, an occasional “okay” or “yeah,” that sometimes slipped into the thick Slovenian hymn. I Skyped with my family and friends in the evenings from my apartment, but when I stepped out each day onto the loud and lively streets of Ljubljana, it was like entering a sanctuary of soundlessness.

There was nourishment in this aloneness, a rendering of someone I had imagined but never embodied, someone independent, someone undistracted. Being alone, I could feel the starkness of my reflections, which began to guide my work into places I’d been afraid to go. I searched for unobstructed paths through words and sentences and, as I worked, my own transparency was revealed more and more. At home in Vermont, I could mask my fear of this exposure in the endless distractions of daily life, but here in Ljubljana, in the swaths of silence before me each day, I was able to see my writing and myself in a way I had not been able to before.

Now is a different time. Now is a venturing time, an interacting time. I have some family with me. We are learning Slovenian together and taking on the Fulbright role of “Cultural Ambassadors.” We have time for work and time for things that are new and interesting and alive. I must be in phase three, “The Recovery.” I feel “content abroad,” as is expected. And in the context of culture shock, I feel it is an appropriate term. The dictionary definition of “recovery” is a “return to normal,” so yes, I have returned to a sense of normal as I interact with people in Slovenia in terms of feeling more at home.

But in a broader, and at the same time, more personal, sense, the concept that recovery is something we should strive for makes the assumption that returning to normal is a desired outcome. I have always thought this was strange because the person we might become after “The Rejection” could actually be a more whole, possibly more human, version of ourselves. Being so completely alone forced me to stand face to face with continued heartbreak: the death of my husband and the uncertainty of a new love I’d clung to for dear life in the last couple of years. But working every day, isolated in my apartment with all those feelings, gave me an earnest and quiet tenacity to try and penetrate the truth of my writing, which is really, the truth of my own self, altered and striving to be less fragmented, but never returned to normal.

The U.S. Bureau for Cultural Affairs says that, when adjusting to a new culture, we must learn to be “comfortable with ambiguity.” I guess this is also true when adjusting to the aftermath of loss. There’s nothing to be certain of anymore. All we can do is attempt to be comfortable standing as an outsider, living a life almost parallel to the one we left behind, walking like a ghost through the days and, most of all, finding the silence within ourselves to navigate a new way of being.