I was invited to be a writer-in-residence at NES in Skagaströnd, Iceland for the month. So right now I’m living at the base of the mountain, Spákonufell. It’s stunning. 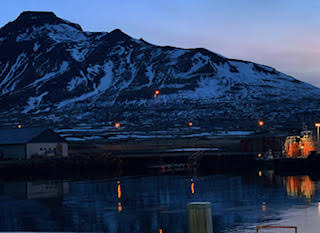 How I got here: I took an overnight flight from Boston, landed in Reykjavík at 6AM and stayed put for two nights, acclimating to (and reveling in) the intense wind, traveling alone again, the dramatic approach of darkness, the dwindling of light and the escape from so much day.

I did the things I love to do in cities: WALK, take pictures of streets and buildings, talk to strangers, WALK, eat new kinds of food, daydream through libraries and art museums.

I got on a bus in the dark morning and traveled five hours north, stopping twice for bathroom breaks (no toilet on board). The sun rose, but as we drove further and further away from Reykjavík, the light faded instead of intensified and the land became desolate and the sky broadened. 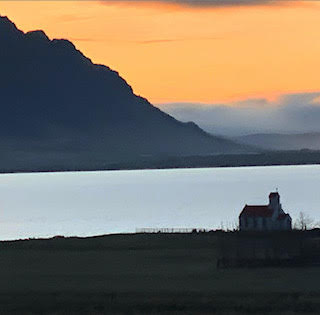 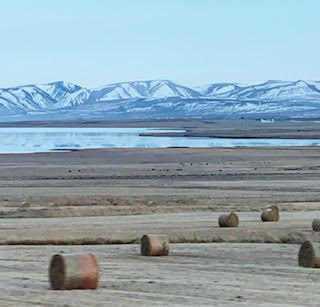 The bus stopped at a gas station in Blönduos and I got on a six-seat shuttle for 20 minutes up along the peninsula to Skagaströnd.

Like many other sites in Iceland, there’s an accompanying folk tale/true story (the Sagas) about the mountain. Þórdís (Thordis), a prophetess and one of the first Europeans to come to Iceland, settled the town of Skagaströnd near the end of Pagan times–10th century. She climbed the mountain every day and hid her fortune, including a golden comb, somewhere on Spákonufell. She put a spell on the treasure and said that only a woman who has never been baptized and never heard the Christian God’s words, could find it. So far, it’s never been found. I plan to learn more about Þórdís while here. (Unfortunately, I was baptized–thank you, Nana–and so will never find it myself.) This land is full of sagas and magic and strong women. It’s gonna be a good month.

delight
People I encounter--on airplanes, in shops--often ask me why I’m so 'happy.' It’s the strength of the dead, I DON’T say like a crazy person. But it’s what I think. It’s the brilliance of love transformed and living in me everywhere I go. There is no separation between me and Jay, me and Brad. It’s everything I learned in my meditation ashram as a young person—now actualized, realized. Kind of feels like what I’d describe as being a recipient of ‘divine resurrection.’ For me, grief and joy are partners in this world. Too woo-woo? Sorry. But try to look for it. It’s in a little crevice beyond rational thought. Probs people think I’m high half the time when I go around all happy but I don’t do drugs or even drink much. It’s the gift of love that can come with heartbreak.
If the understanding of truth is possible by digging it out of its opposite, then maybe absurdity 🍄🦄🪲🌚 can save a person. A great salve. Like poetry, like literature—places with no limits, where everything that can’t be said, must be said. Agitate truth. #workingonit
Foss and Moss spot spotted. Artist: @jendonnery “Of Woman Born”
Oh hello, well yes, Foss and Moss Puppets would love to play this venue, of course of course, but unfortunately, due to their current form (nature spirits), they can’t inhabit human-made physical (or conceptual) structures—no matter how pink and yellowy delicious! Also they are sleeping. Thank you, though! Xoxo 💋 🥰😘🦄 #peacocktheatre #fossandmosspuppettheatre #theatreoftheabsurd #practiceasresearch #puppets
Oh I’m in love with you, dear Dublin.
Dublin’s becoming a friend.
Security is a myth. Developing tolerance for groundlessness.
Fearlessness, for me anyway, means genuinely turning toward my own limitations and embracing them—it doesn’t mean being “powerful” and “doing whatever it takes”—things I grew up believing in the deeply toxic self-help world. It’s the opposite really. For me, it’s about being gentle with myself.
Getting on boat. Crossing Irish Sea. Returning to Wales where I did first year of PhD. Since then, been working on it from States. That decision was made bc I didn’t want to be separated from Brad. Now he’s gone and I’m going back. Had not thought I’d be so affected. But that’s the thing about grief. There’s no way to tame it. It can come out of no where. Even when you’re moving forward and embracing wonderful things, new ways of being, new friends, new life….it stops you in your tracks. Arresting. It isn’t always even about form. It’s not sentimental. I hate sentimentality. It’s a wave, a series of sensations….But I love boats. So we’ll see how it goes. I just super wish they’d stop playing Adele.
Places are for different things. This one has been for transition, gentleness, poetry. It didn’t pressure me to do anything but rest and walk and be quiet in myself. Thank you, sweet, calm Dublin.
Pause. Adjust. Look left. Back across the ocean, but further, and further still coming up. This town is letting me take a breath. And no, I don’t need any more books, but come on.
Too bad the cast wasn’t with us in Brooklyn to experience urban gnome-land salads.
last u.s. stop: hometown hugs with little love bug cutie
Hometown stopover for Foss and Moss Puppet Theatre
sometimes you fully get/imbibe the aesthetic after you leave a place
I love a meticulously curated bookstore……
Foss and Moss Puppet Theatre leaving West Coast in search of new performance venues
Loading Comments...
%d bloggers like this: